Without a doubt, Disney has had a tough go from a PR point of view the past few months. They’ve said some pretty crazy things. Specifically with regards to the parks. 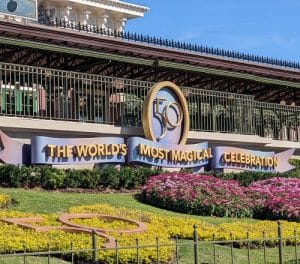 Much like all of us, Disney has had to quickly adapt and push forward during an ongoing global pandemic where the risk level and medical advice change almost daily. The main differences between Disney and all of us dealing with this nightmare is that Disney has had to figure out the best way to squeeze as many people as possible into their various theme parks, resorts and cruise ships while doing their best to ensure everyone’s safety and provide all of us with an expected level of customer service that is above and beyond any other Fortune 500 company on the planet…all while operating a year removed from the financial bottom falling out of their company in pretty much every major segment of it.

Come on people. We need to cut them a little slack….

That all said, I am an eternal optimist and am actually pretty excited for what’s to come at Walt Disney World in 2022. We are, after all, smack dab in the middle of Disney World’s 50th anniversary celebration and there is a TON of activity going on in the parks this year.

Without further ado, here is a quick rundown of what I am most excited to see in the parks over the next 10 months:

Much like 2021, Epcot is the place to be for new and exciting additions in 2022. We know that the epic new Marvel-themed roller coaster, Guardians of the Galaxy: Cosmic Rewind will debut in the first half of the year. Its almost impossible to not be excited for this new ride. Its also exciting to think about the relief this ride (and the recently opened Remy’s Ratatouille Adventure Ride) will have on the lengthy lines for other ‘A Ticket’ attractions across the park like Frozen, Test Track and Soarin. It will definitely help us get on some of the park staples that have seen their queues grow over the past few years.

There are other attractions, restaurants and shops that MAY open in 2022 or early in 2023, but thus far Disney has been pretty tight lipped about their timeline. Of the bunch, most likely to open in 2022 is Connections Café, which is essentially Epcot’s replacement for the dearly-departed Electric Umbrella. Although we don’t have a timeline for this new eatery, they’ve already made a ton of progress and it is tough to see it not opening this year.

A bit of a reach is the new Moana-themed Journey of Water attraction which is basically being constructed upon the ruins of Communicore West. This project is a very aggressive and complex reimagining of the space, and we have seen significant progress on it being made over the past few months through aerial photography and visitor accounts. A 2022 open date is probably a bit of wishful thinking for this oen, but they haven’t said it isn’t opening in 2022 yet, so I’m saying there’s a chance.

Also, as we see the most recent pandemic surge quiet down, we will inevitably see a continuation of things getting back to ‘normal.’ Seeing all of the shops and restaurants in World Showcase open and fully staffed is some thing I am very much looking forward to (I’m looking at you Morocco).

Finally, at Epcot, we have the festivals. If you haven’t been to an Epcot festival in a while, they most certainly are not what you remember them to be. The culinary and entertainment options at these value-add ticket-entry events are at a level above anything you remember them to be. If you are a foodie, lover of the arts, nostalgic music, specialty drinks, horticulture or Disneyana, the Epcot festivals are a must-do. This year, we are getting the longest Flower and Garden Festival ever at 125 days. No doubt, the Food and Wine and Festival of the Holidays events will be equally as impressive and notable in 2022.

Disney’s Animal Kingdom is another case of getting back to normalcy is something to look forward to. A number of shows, restaurants and shops have been shuttered for quite some time at this park and it is nice to see them come back online and operating in a somewhat similar fashion to how they did pre-pandemic.

One thing I am very much looking forward to coming back, but in a different iteration is the Finding Nemo the Musical performance. When it is brought back online in TBD 2022, this show will be reimagined into Finding Nemo: The Big Blue… and Beyond!. Where the original Nemo show was based on the story of the original Finding Nemo movie, the new version is set in the blockbuster Finding Dory movie timeline. Aside from this, it will be interesting to see what other changes the Nemo Musical will have when it comes back this year.

Note: I’m not going to talk about Kite Tails here. Its freaking lame and I really hope someday the Imagineeers can figure out what the heck they can offer of value to that beautiful location.

Again, it will be nice to see if some of the ‘we take it for granted until it is gone for 2 years in a pandemic’ features like Star Wars Launch Bay, the Disney Credit Card Star Wars Meet and Greet, the Voyage of the Little Mermaid show and The Incredibles Municiberg area.

Additionally, I cannot wait for Fantasmic to make its return in 2022. There have been recent rumors that the lagoon is being filled with water and the show is being worked on now. The return of Fantasmic is likely to have new segments and elements, so it will be fun to see that come back in the near future.

In terms of new stuff at Hollywood Studios, 2022 is all about Roundup Rodeo BBQ in Toy Story Land. This is the table service restaurant that was announced shortly after the debut of Toy Story Land, but then there was that whole pandemic thing. We know now that this exciting new eatery is close to launch, so you can expect to see it seating patrons in 2022. Trying to get a seat in the Woody’s Lunch Box area during any normal meal time is akin to trying to get a parking spot at the local mall 2 days before Christmas (and the tactics for getting a table are similar and just as shady), so an additional culinary option in this area of the park to alleviate some of that insanity is very much welcomed.

OK, so Tron Lightcycle Run is almost certainly not happening in 2022, so that sucks, but we move on…

Who needs Tron , when one of the most beloved rides in all of Disney World is coming back this year after close to four years of inactivity (Due to Tron). The Walt Disney World Railroad’s return date has not been announced, but the train has been running test trips lately, which leads most to believe its return is imminent. This will be awesome! The Main Street train station has also received a refurb during the train’s hiatus, so it will be great to see how that turned out. This ride is literally one of maybe 3 at Disney World that can get me to leave my winter perch here in the frozen tundra of New Hampshire to make a special trip just to ride it when it returns (but don’t tell my wife that).

There is so much more happening at Disney World in 2022  that we can get excited for. For the first time in 2 years, we will have all of the resorts open; we will see signature dining experiences at Flying Fish, Jiko and Victoria & Alberts return; we are slowly starting to see buffets come back across the property; we are sure to see chartered boats return on the Magic Kingdom lakes soon. Parades, Meet n Greets and Stage Shows are returning; things are getting back to normal at Disney Springs.

and then there is Galactic Starcruiser opening in March. Its happening and I’m sure SOMEONE is excited about that.

So there you have it. Everything I am looking forward to this year at Walt Disney World. I’ve been seeing so much hate for what Disney has been doing and saying lately on blogs and on YouTube that I felt it was important to put together this little sliver of positivity and let you all know why I am looking forward to hopping on a plane and heading to Bay Lake multiple times in 2022.