Disney announced a few weeks back that they would be re-imagining part of Hollywood Studios and combining the Muppets Courtyard and what is left of the Streets of America into a new “Grand Avenue” area of the park. Central to this plan was the creation of BaseLine Tap, a new restaurant themed as a traditional California corner pub. Clearly, no time was wasted in getting BaseLine Tap up and operational as it is now open! 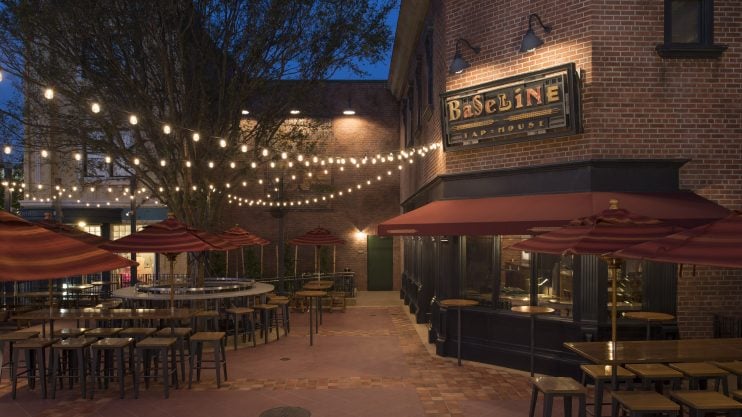 So what can you expect at BaseLine Tap?

Capturing the spirit of present-day Downtown Los Angeles, Grand Avenue is home to vintage office buildings and warehouses that represent the city’s vibrant districts and cultures. In a quaint brick building, BaseLine Tap House pays homage to the Figueroa Printing Company, a mom-and-pop print house that had ties to the Disney Studios in nearby Burbank. The space features many cool architectural and mechanical details with exposed walls and old printing equipment and artifacts, blending the past and present in an inviting space. Outside is a charming tree-shaded terrace, perfect for a relaxing break in the day.

BaseLine Tap House celebrates the revitalization of Downtown Los Angeles with California craft ales, lagers and cider as the stars of the drink menu, along with California wines on tap and specialty cocktails. A gourmet non-alcoholic lemonade and soda on tap round out the drink selection. Small bites include a Bavarian pretzel with mustard and beer-cheese fondue, spiced almonds and a charcuterie board featuring California cheeses.

What is on the BaseLine Tap menu?

The BaseLine Tap menu currently focuses on beer, wines and cocktails and much less on the food as they really only offer pretzles, nuts and cheese, but hey, it is a pub after all. Here is a link to the full BaseLine Tap menu.

When is BaseLine Tap open?

BaseLine Tap is open daily from 11am until park close.

Where is BaseLine Tap?

BaseLine Tap is in the new Grand Avenue section of Disney’s Hollywood Studios, here is a helpful map to get you there quickly.

No, unfortunately, the BaseLine Tap currently does not accept Disney Dining Plans.