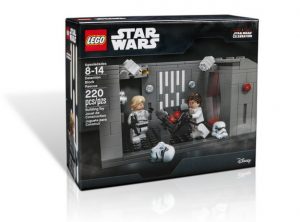 As many of you know the massive Star Wars Celebration 2017 event is just around the corner (April 13-16 in Orlando) and there are a number of event-exclusive toys and memorabilia that attendees have a chance to purchase. One such goodie is an exclusive Celebration 2017 LEGO Star Wars set created to commemorate the 40th anniversary of Star Wars: A New Hope.

According to our friends at RebelScum.com (a great site to find Star Wars toy rumors and buying tips), the set will cost $40, but there is a lottery involved. Visit their site for more info about the lottery and additional pics of the set.