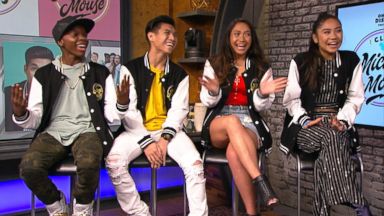 A new class of Mouseketeers made their debut on September 8, reimagining a beloved Disney franchise for a new generation that consumes content in new ways. Club Mickey Mouse is always-on; the digital- and social-first variety program lives on Facebook and Instagram, and comes from the Disney Digital Network. Launched in May at the IAB Digital Content NewFronts, the network ties together more than 350 social media channels through vast content resources that include distinct editorial voices that bring The Walt Disney Company’s characters and stories directly to consumers’ social feeds, and a curated set of Maker creators and influencers.

“The creation of Disney Digital Network is the result of our ever-evolving approach to our digital media and content creation, audience development and distribution across digital platforms,” explains Andrew Sugerman, executive vice president, Publishing and Digital Media, Disney Consumer Products and Interactive Media. “As Millennial and Gen Z audiences continue to consume ever-increasing content across mobile and social platforms, we feel it’s critical for Disney to have a network where audiences can experience quality content where they reside and with the influencers they trust.”

Disney Digital Network (DDN) is producing content that is as far-reaching and as diverse as The Walt Disney Company’s unparalleled intellectual property. The As Told By Emoji video series retells classic Disney stories in a fun, modern, emoji-based way; while the Emmy® Award-nominated Star Wars Show gives fans behind-the-scenes access to the iconic franchise. Polaris serves as DDN’s gaming editorial voice, while Disney LOL brings entertaining and amusing micro-content to kids—whose moms and dads connect with the parenting website Babble and its robust social platforms.

Licensees, retailers and advertising partners are looking to DDN to reach audiences that are passionate about Disney’s franchises, characters and worlds. Disney has collaborated with IBM for Science & Star Wars, a digital series that explores real-life scientific advances that fans may have first been introduced to in the Star Wars films; and the just-launched Club Mickey Mouse is a partnership between Disney and HP, with the eight new Mouseketeers commemorating their Club Mickey Mouse experiences and stories via HP Sprocket Photo Printers. Disney Digital Network engages advertising partners through Disney Co/Op, an in-house suite of marketing services. “Co/Op gives advertisers the chance to align their brands with Disney’s stories and characters across digital platforms,” Sugerman says. “Only Disney can bring all platforms, superior content, scalable audiences and creativity of this caliber to the game.”

DDN also furthers the Disney brand globally, Sugerman details, and he notes that nearly 75 percent of Disney’s followers on Facebook are based outside the U.S. “By establishing Disney’s place on global digital platforms like Facebook, Twitter, YouTube and others, we’re able to reach audiences around the world with content that is relevant both locally and in the U.S.,” he says.

Sugerman emphasizes that by staying at the forefront of audiences’ evolving media consumption habits, the Disney Digital Network is carrying on the Company’s legacy of innovation. “The Disney Digital Network is not just thinking about where audiences are now—we’re also thinking about where we believe audiences are going, how they will continue to evolve, how technology will continue to evolve and more,” he says. “This kind of evolution is in Disney’s DNA.”