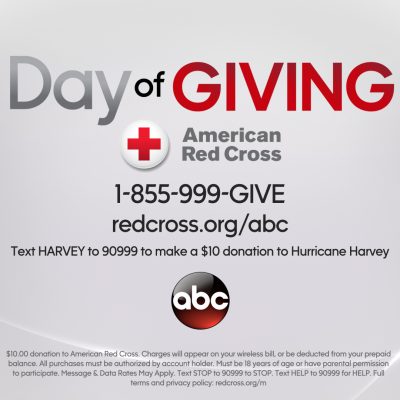 While we have been witnessing some of the worst that nature has to offer down in Texas over the past few days, we are also seeing some of the best of humanity. With so many people around the world pitching in and doing what they can to help the victims of hurricane Harvey’s devastation, Disney is also doing their part. In addition to the $1 million cash donation and a dollar for dollar employee donation match commitment that Disney/ABC made to relief efforts on Tuesday, the media giant is also hosting a “Day of Giving” event today, August 31st to help those impacted by Harvey.

The event will span the Disney/ABC media network and will include ABC local affiliates, Good Morning America, additional ABC programming, Freefrom, Radio Disney and the various social media platforms operated by the network. The event will focus on generating viewer/listener/reader donations to the American Red Cross.

“Our hearts go out to everyone in the devastating path of this historic storm,” said Robert A. Iger, chairman and chief executive officer, The Walt Disney Company. “It’s hard to fully appreciate the impact, in part because it isn’t over yet. But we know thousands of people have lost everything and now face the daunting challenge of putting their lives and communities back together, and we’re using our unique resources and reach to help those in need.” (source)

Want to do your part to help out with Harvey relief? You can: