Disney Parks today announced plans to commemorate the 65th anniversary of Peter Pan’s debut (February 5, 1953), at Walt Disney World. Here is a quick rundown of what visitors to the Magic Kingdom in early February can expect (source): 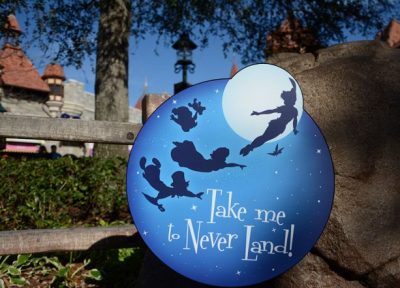 February 4-10, Captain Hook and his loyal sidekick Mr. Smee will come ashore to meet you in Fantasyland intermittently from 9 a.m. – 6:15 p.m. Tick tock: Be sure to meet this duo before they head back to the Jolly Roger!

Peter Pan’s sneaky shadow is notoriously difficult to find, but the PhotoPass photographer next to the Captain Hook and Mr. Smee Character Experience is exceptionally skilled at locating it with the help of a special Magic Shot! Stop by and you just might find it in your photo.

Looking for some Magic Shots with a little extra pixie dust? Visit the photographer on the bridge next to Sleepy Hollow Refreshments to bring out your inner fairy, or have the most famous fairy of them all appear in your photo when you visit a photographer on Main Street, U.S.A.

If all of these photo opportunities have you ready to fly off to Never Land, stop by Partners Statue in front of Cinderella Castle where a photographer will have a prop you can include in your photos.