Disney announced today that they will be debuting the very first Star Wars: The Last Jedi T-Shirts and pins in their US parks next month. The shirts and pin depict Rey, Finn and BB-8- all familiar faces introduced in The Force Awakens and presumably key characters in The Last Jedi, which is slated to be released on December 15th.

The products are part of their ongoing Star Wars: Force for Change campaign to support the US Fund for UNICEF. 25% of the retail sale price of these goods will be donated to the UNICEF Kid Power program.

The T-Shirts and pin will be available at Star Wars Celebration in Orlando (April 13-16) and then in shops at Disney World and Disneyland shortly after. 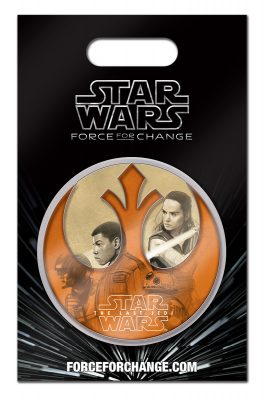 Be the first to comment on "Disney Debuts Star Wars: The Last Jedi T-Shirts"