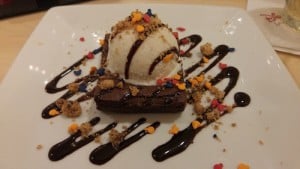 Word came out today that the Disney Dining plans at Walt Disney World will be changing for 2017. The change isn’t dramatic, but will be a noticeable one if you are a Disney resort regular and were used to the current package.

The change from 2016-2017 is a trade of the quick service dessert for an additional daily snack. This means that you will get the following allotments on the basic Disney Dining plan per night of stay in 2017:

Be the first to comment on "Disney Dining Plans are Changing in 2017. Here is What You Need to Know."