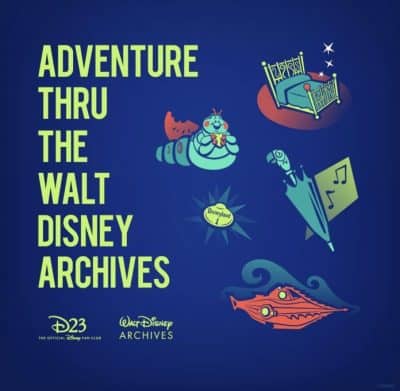 For over 50 years, The Walt Disney Archives has been preserving the history of Disney films, television shows, theme parks, books, and so much more—and this November, Disney+ subscribers will get a peek inside its massive collection. The documentary, which premiered in June 2020 exclusively for D23 Gold Members in celebration of The Walt Disney Archives’ 50th anniversary, is hosted by legendary producer Don Hahn. The film looks at beloved Disney icons, including its theme parks and Studio lot, through an engaging, historical lens, as Hahn speaks with Walt Disney Archives director Becky Cline and other members of the Archives team. Each stop on the adventure offers a look at some of the iconic artifacts that have played a role in shaping The Walt Disney Company. The film, directed by John Gleim, features new interviews with Disney Executive Chairman Bob Iger, Marvel Studios’ Kevin Feige, Pixar’s Pete Docter, film historian Leonard Maltin, and many more. Adventure Thru the Walt Disney Archives will debut on Disney+ November 19. (source)