Aladdin and the King of Thieves (1996 Movie) 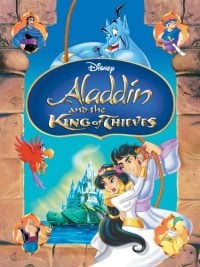 Aladdin and the King of Thieves Description:

Aladdin and his friends—Jasmine, Abu, Carpet and, of course, the always entertaining Genie—face all sorts of terrifying threats and make some exciting last-minute escapes as they pursue the King Of Thieves and his villainous crew. Join them as legendary secrets are revealed including the identity of Aladdin’s long-lost father, and follow them to the fantastic Vanishing Isle where they search for the ultimate treasure!