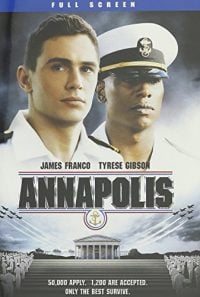 Filled with intense action, ANNAPOLIS is an inspirational tale of courage and honor that will keep you riveted. As hard as it is to get into the most elite military academy in the country, surviving behind its walls is beyond belief. Young Jake Huard (James Franco) has always known he has what it takes to make the grade. But once inside, everything Jake thought he knew is challenged in ways he never could have imagined. Standing between him and his lifelong ambition of becoming an officer in the U.S. Navy is his company commander — Midshipman Lt. Cole (Tyrese Gibson), a relentless and merciless battle-seasoned Marine. Thrilling and exhilarating, ANNAPOLIS reaffirms the power of believing in your dreams.
Purchase Movie