Here is everything you need to know about the amazing Hollywood Pictures movie Arachnophobia including casting, reviews, fun facts and more. I hope you find this listing informative and helpful! 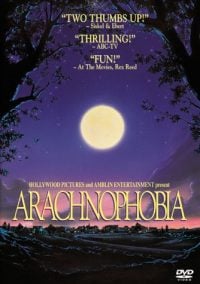 Everyone is afraid of something. For Dr. Ross Jennings (Jeff Daniels), his phobia is downright embarrassing. But when he moves his family to a small town, the one thing that bugs him most is now harming the townspeople at an alarming rate. For this unlikely hero, overcoming a childhood fear of spiders might just save the community, but it may already be too late! Directed by Frank Marshall and also starring John Goodman, this hit entertains with its terrific mix of thrills, chills, and laughter!