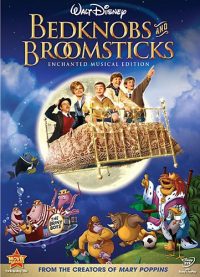 When young Charlie, Carrie and Paul move to a small village during World War II, they discover their host, Miss Price, is an apprentice witch! Although her early attempts at magic create hilarious results, she successfully casts a traveling spell on an ordinary bedknob, and they fly to the fantastic, animated Isle of Naboombu to find a powerful spell that will save England!