Bringing Down the House (Touchstone Movie) 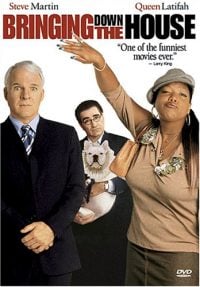 Bringing Down the House Details:

The hilarious Steve Martin and Queen Latifah star with Eugene Levy in the laugh-out-loud hit comedy BRINGING DOWN THE HOUSE. Peter Sanderson (Martin), a divorced, straitlaced, uptight workaholic attorney, meets a brainy bombshell lawyer in an on-line chat room and they make a date. Expecting his soul mate, he opens the door and finds himself face-to-face with Charlene (Latifah) — a wild and crazy soul “sister” who’s just escaped from prison and wants Peter to clear her name. But Peter wants absolutely nothing to do with her, and that prompts Charlene to turn Peter’s perfectly ordered life totally upside down. Peter soon finds out he may need Charlene just as much as she needs him. It’s a houseful of fun your family will enjoy again.
Purchase Movie