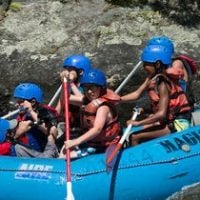 Disney Channel returns to Camp Waziyatah in Waterford, Maine, for a new installment of the hugely popular docu-series “Bug Juice.” The series chronicles the summer camp fun and adventures of a new generation of girls and boys who, with the help of their counselors, explore exciting outdoor activities, form new friendships and create memories for a lifetime.

“Bug Juice” is produced by Evolution Media which also created and produced the original version of series and has been at the helm of other popular unscripted kids content for Disney Channel, including “Movie Surfers,” “Totally in Tune” and “Totally Hoops.” It is executive produced by Douglas Ross, Alex Baskin, Tina Gazzero Clapp and Toni Gallagher. Ross, Clapp and Gallagher were all involved in the production of the original series, which premiered on February 28, 1998, and ran for three seasons.

The first season of the original “Bug Juice” took place at Camp Waziyatah; the second season was filmed at Camp Highlander in Horse Shoe, North Carolina; and the third season took place at Brush Ranch Camp in Tererro, New Mexico.

As the unscripted series follows these kids’ journeys, viewers experience the myriad of fun activities as well as the challenges the campers face, including trying to fit in, being homesick, swimming tests and the ups and downs of friendship. Through it all, viewers see the resilience of the kids, the many ways they support each other and how they each come into their own through a summer of fun. (source)