Here is everything you need to know about the amazing Hollywood Pictures movie Celtic Pride including casting, reviews, fun facts and more. I hope you find this listing informative and helpful! 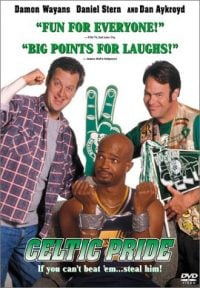 Crowd-pleasing Hollywood stars score big-time laughs in this outrageous comedy about team spirit gone way out-of-bounds! Lewis Scott (Damon Wayans) is a stuck-up superstar who’s about to lead his team to the NBA Championship. Jimmy (Dan Aykroyd) and his buddy Mike (Daniel Stern) are a pair of die-hard basketball fans who’d do anything to help their team win… even if it means kidnapping Scott before the final game! But when Scott ends up being a tough competitor off the court, too, he hilariously turns the tables on his dim-witted captors and sends the fast-breaking fun into overtime!