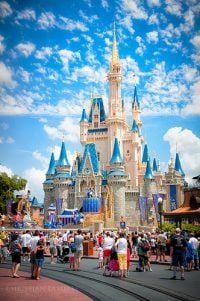 Inspired by the castle in Disney’s Cinderella, the iconic Cinderella Castle is the symbol of Magic Kingdom park.

Rising high in the sky at the end of Main Street, U.S.A., Cinderella Castle welcomes you to a magical world of fantasy and fun. The central icon of Walt Disney World Resort, the castle invites all who visit to celebrate in a place where dreams come true.

A Classic Design
Boasting soaring spires, ornate turrets and regal royal-blue rooftops, the 189-foot castle invokes both the magic and mystery of real-world castles—such as Fontainebleau and Versailles—and fictional palaces like the one seen in Disney’s animated classic Cinderella.

Adding to the enchanted environment, the castle is surrounded by a tranquil moat, lush green grass, rose bushes and a wishing well, providing perfect picture-taking opportunities from nearly every angle.

Nighttime Enchantment
Cinderella Castle provides a spectacular backdrop for the fireworks extravaganzas that occur in Magic Kingdom park on select nights. Over 16 million colored lights illuminate the castle when the sun sets; and during fireworks shows, lights and music effortlessly come together to create an even more magical setting.

Step inside Cinderella Castle and feel like the hero or heroine of your own storybook adventure. Within the main castle corridor, 5 handcrafted mosaic murals—containing 14-karat gold and silver plus over one million pieces of glass in 500 different colors—tell the classic tale of Cinderella.

Located within, Cinderella’s Royal Table and Bibbidi Bobbidi Boutique craft even more magical experiences for the young and young-at-heart.