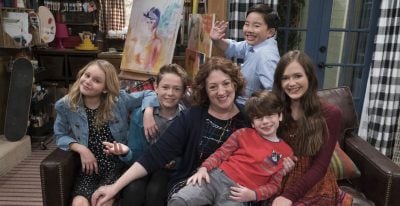 Dakota Lotus and Ruby Rose Turner lead the ensemble cast of “Coop and Cami Ask the World,” a live-action comedy series about Cooper and Cameron Wrather, two middle-school siblings who make nearly all of their decisions – both mundane and madcap – by crowdsourcing opinions from the millions of followers of Cooper’s online channel, Would You Wrather. Also starring are Olivia Sanabia (“Just Add Magic”) as their older sister Charlotte; Albert Tsai (“Dr. Ken”) as Coop’s best friend Fred; Paxton Booth (“The Toy Box”) as their little brother Ollie and Rebecca Metz (“Better Things”) as their mom Jenna. Production has begun on the sitcom, for kids age 6-14 and their families, and is scheduled for premiere this fall on Disney Channel.

In the premiere episode, Cooper and Cami are preparing for their school dance when they learn their mom is ready to start dating again, now that it’s been two years since their father passed away. Much to their chagrin, her first date happens to be with their principal. Not sure what to do, they turn to the Wratherheads for advice, asking “Would you Wrather have your mom date the principal or take your mom to the school dance?”