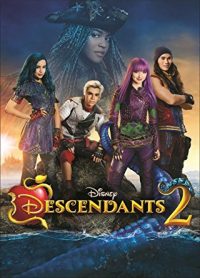 The Villain Kids are back in a high-stakes adventure that’s bigger, bolder and badder than before in the new Descendants 2 DVD!

When the pressure to be royally perfect becomes too much for Mal (Dove Cameron), she flees Auradon and returns to her roots on the Isle of the Lost. Hoping to retrieve her, Evie (Sofia Carson) and the rest of the gang sneak onto the Isle. But Mal’s former archenemy Uma (China Anne McClain), daughter of Ursula, has seized power. And together with her pirate crew, Uma prepares to unleash havok on the VKs and Auradon! With swashbuckling action, amazing song & dance numbers and must-see bonus features, DESCENDANTS 2 rocks all-new ways to be W-I-C-K-E-D!