Here is everything you need to know about Walt Disney World’s Animal Kingdom park’s Dinosaur ride including ride history, fun facts, photos and more. I hope you find this listing informative and helpful! 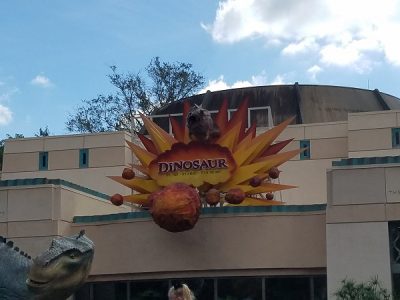 Take off on a scary, prehistoric tour aboard a rip-roaring Time Rover to save a dinosaur from extinction.

Travel back in time on a perilous race to rescue an Iguanadon before the meteor that wiped out the dinosaurs strikes.

Step inside the pristine halls of The Dino Institute, a one-time secret research facility and museum that is home to real fossils dating back to when dinosaurs walked the earth. Stroll past prehistoric exhibits and behold the colossal skeleton of the carnivorous Carnotaurus, one of history’s most feared dinosaurs.

A Secret Mission
Make your way into the research control center and watch an informative video about your expedition into the primeval past. The briefing takes a turn when you’re recruited to rescue an Iguanodon from extinction and return to the present with the 3.5-ton dinosaur in tow. There’s just one problem: the date you’ll be visiting is when a giant meteor hit earth and caused the extinction of nearly all living things.

Blast to the Past!
Board a sturdy, 12-seat Time Rover and race through a darkened forest in search of the tagged dinosaur.

Speed past a spiky Styracosaurus grappling with a nearby tree. Brace yourself as you careen through unpredictable hairpin turns, a ragged Alioramus foraging for food nearby. Dart around a fearsome Velociraptor hunting for prey and avoid the clutches of a Cearadactylus soaring overhead.

As the countdown clock ticks, meteors crash all around you: The end is near. Suddenly, the terrifying roar of an unimaginably huge beast can be heard in the distance. Is it the friendly Iguanodon you’re searching for—or the dreaded Carnotaurus looking for a meal?

Time is nearly up. Will you complete your mission and make your escape? Or will you join the dinosaurs and become extinct?