Here is everything you need to know about Walt Disney World’s Epcot’s Disney & Pixar Short Film Festival attraction including history, fun facts, photos and more. I hope you find this listing informative and helpful! 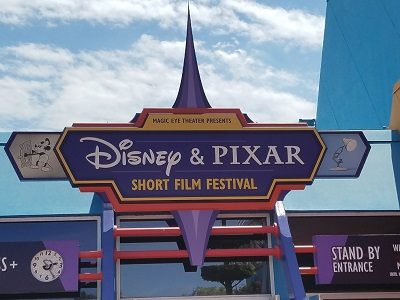 At the Disney & Pixar Short Film Festival, experience popular Disney and Pixar short films like never before—in 4D for the first time ever.

Join us in celebrating the rich imagination and innovation behind animated storytelling.

Venture inside the Magic Eye Theater to view a special pre-show presentation, where John Lasseter, chief creative officer of Pixar and Walt Disney Animation Studios, gives you an inside look into the collaborative creative process of bringing beloved stories and characters to life.

Then, enter the auditorium, don a pair of 3D glasses and settle in for the 18-minute festival, featuring 3 dazzling short films and in-theater effects. (source)