Enemy of the State (Touchstone Movie)

Here is everything you need to know about the amazing Touchstone movie Enemy of the State including casting, reviews, fun facts and more. I hope you find this listing informative and helpful! 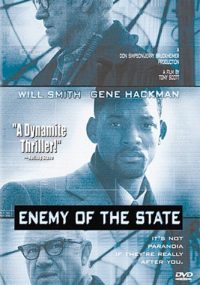 Enemy of the State Details:

Hot Hollywood favourite Will Smith (Men In Black, Independence Day) stars with two-time academy award tm winner* Gene Hackman in a high-powered suspense thriller where non-stop action meets cutting edge technology. Robert Clayton dean (Smith) is a successful Washington D.C. Attorney who – without his knowledge – is given a video that ties a top official of the national security agency (Oscar® winner** best actor Jon Voight) to a political murder. Instantly, every aspect of dean’s once-normal life is targeted by a lethal team of skilled nsa surveillance operatives, who wage a relentless, ultra high-tech campaign to discredit him and retrieve the incriminating evidence! Also featuring Regina King (Jerry Macguire, Boyz In The Hood) in an impressive, star-studded cast – get ready for the action to explode as dean desperately races to reclaim his life and prove his innocence…
Purchase Movie