Here is everything you need to know about the amazing Hollywood Pictures movie Father Hood including casting, reviews, fun facts and more. I hope you find this listing informative and helpful! 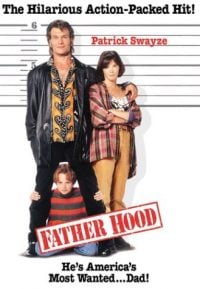 Screen sensation Patrick Swayze stars as Jack Charles, a lovable small-time crook with big-time dreams! Jack’s latest scheme of hitting it big is interrupted when two strangers — his kids — suddenly appear on his doorstep to reclaim him as their dad. Before long, Jack and the kids are racing toward the biggest heist of his career — pursued by the cops and the FBI on a hair-raising, action-packed cross-country chase! This nonstop hit delivers an arresting combination of action and comedy sure to entertain everyone!