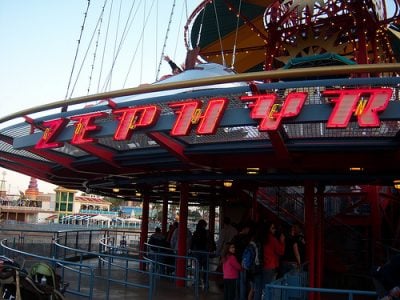 On Golden Zephyr, hop inside a sleek galactic gondola for an unforgettable blast to the past!

Imagine battling outer-space invaders as you glide through the air in a shining spacecraft. For 90 seconds, journey back to the 1920s, when movie matinees and pulp novels told stories of heroes fighting to save the world in sleek ships that sailed through space. On Golden Zephyr, that battle can be fought—and won—by you!

Blast Off!
Make your way to a blue launch platform via a metallic staircase and climb aboard your shining starship. In true vintage sci-fi fashion, each Golden Zephyr is finished with quadruple stabilizer fins, gold and chrome trim, running lights and underbelly strobes. Then, strap yourself in and prepare for takeoff.

As you ascend into the sky and rotate around an ornate red tower, let your imagination take you wherever you want to go for the ultimate adventure beyond the stars!