He Got Game (Touchstone Movie)

Here is everything you need to know about the amazing Touchstone movie He Got Game including casting, reviews, fun facts and more. I hope you find this listing informative and helpful! 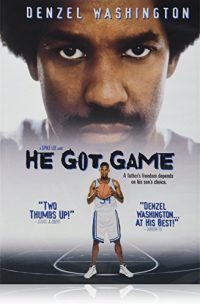 He Got Game Details:

Academy Award(R)-winner Denzel Washington stars in this must-see story about a convict given one shot at a second chance to be a father! With promises of a reduced sentence, Jake Shuttlesworth (Washington) is granted temporary release from state prison in order to persuade the nation’s top basketball recruit … his estranged son, Jesus (NBA basketball star, Ray Allen), to play ball for the governor’s alma mater! But just as Jesus faces intense pressures and irresistible temptations contemplating his big decision, Jake is also forced to consider not only what’s best for himself … but what’s best for his son! With a groundbreaking soundtrack by the legendary Public Enemy — plus great cameos from John Turturro and basketball personalities Dick Vitale, John Thompson, Dean Smith, and more, HE GOT GAME is a critically acclaimed hit you don’t want to miss!
Purchase Movie