Here is everything you need to know about Walt Disney World’s Magic Kingdom’s It’s a Small World ride including history, fun facts, photos and more. I hope you find this listing informative and helpful! 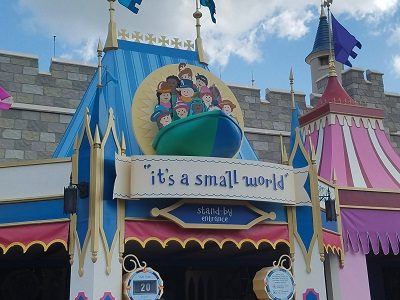 On It’s a Small World, located in Walt Disney World Magic Kingdom’s Fantasyland, embark on a whimsical boat ride past a jubilant confection of singing children from around the globe.

Sing along to the classic anthem of world peace during a delightful musical boat tour hosted by the children of the world. From a colorful dock, climb aboard a cozy boat and set sail along the Seven Seaways Waterway on a 10-minute journey.

Amid a vibrant, multi-colored backdrop exquisitely crafted out of papier-mâché, glitter and fabric, behold a cast of almost 300 traditionally dressed, dimple darlings from nearly every corner of the globe sing a simple song in their native language about universal harmony and dance. Travel to all 7 continents and, by journey’s end, see for yourself that it truly is a small world after all.

Set Sail!
From the snow-capped Swiss Alps to the golden Serengeti, the children of the world are ready to make your acquaintance. During your tour, experience a rainbow of diverse cultures from such far-off locales as:

Before you return home, the children reunite for a grand finale, reminding us of the common bonds of friendship, laughter and happiness we share—and that if we see the world through the eyes of a child, we’ll realize we are all basically the same.