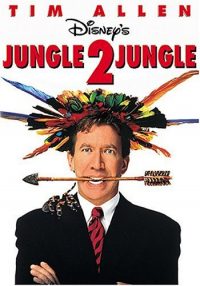 Tim Allen is at it again as commodities broker Michael Cromwell, king of the Wall Street jungle. With money, power, and an engagement to a beautiful fashion designer, he has it all. But when Michael travels to the Amazon to finalize the divorce from his first wife — a jungle doctor — she reveals that he also has a blowdart-shooting, giant-spider-carrying, 13-year-old son, Mimi-Siku. Cultures clash when Mimi is entrusted by his tribal chief to bring back fire from the Statue of Liberty. Back home in New York, Michael must somehow convince Mimi that pets are not for eating and it’s not nice to chase people with your killer spider. But when Michael’s partner (Martin Short) crosses a Russian mob boss in a coffee bean deal, Mimi and Michael must use all their jungle skills in a hysterical father/son rescue.!