Here is everything you need to know about Walt Disney World’s Magic Kingdom’s Jungle Cruise ride including history, fun facts, photos and more. I hope you find this listing informative and helpful! 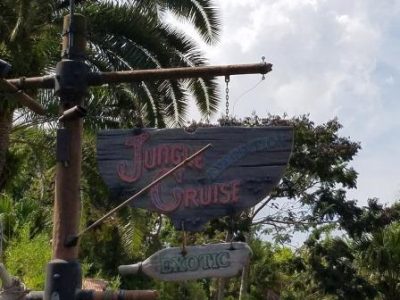 On the Jungle Cruise, located in Walt Disney World Magic Kingdom’s Adventureland, set sail for high adventure on a scenic boat tour of the most exotic and exciting rivers across Asia, Africa and South America.

Embark on a cruise where hippos, elephants and maybe even a headhunter await your arrival.

Trek to a forgotten tropical jungle outpost—home to suspended cargo nets, wooden crates and lanterns—and board a canopied tramp steamer for a tongue-in-cheek adventure led by a trusty skipper through some of the world’s most treacherous rivers.

Along the way, take in lively narration from your friendly skipper, known for a brave heart and a clever joke… or two. It´s a ride you won’t soon forget!