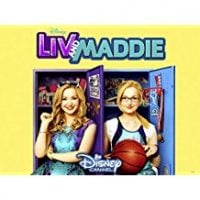 The Rooney’s are moving to California, and Liv and Maddie are ready to start brand new adventures on the West Coast! Now that she’s in Los Angeles, Liv has more acting opportunities than ever, while Maddie begins playing basketball at a brand new university. Parker and Joey have to figure out their place as they begin attending their new science and technology school. And when their younger cousin Ruby returns home from summer camp, the Rooney’s get a “sort of” sibling. (source)