Here is everything you need to know about the amazing Disney movie Man Of The House including casting, reviews, fun facts and more. I hope you find this listing informative and helpful! 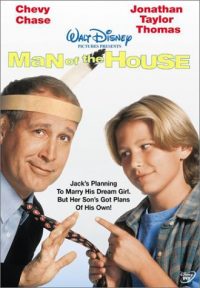 Man Of The House Description:

In Disney’s Man of the House, Chevy Chase is Jack, a guy who’s found the woman of his dreams. Too bad her stubborn 11-year-old son, Ben thinks Jack is a geek! As a test, Ben coaxes Jack into joining the YMCA Indian Guides. Chaos ensues as Jack struggles to prove to Ben that he’s not totally uncool! From rain dancing to building a teepee, Jack will do anything to win Ben’s approval – and his mom’s affection!