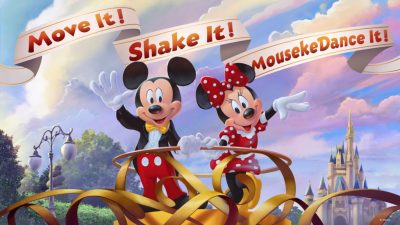 Move It! Shake It! MousekeDance It! Street Party Description:

Celebrate your love for Mickey and Minnie during a special, limited-time street party.

The Magic Kingdom park is pulling out all of the stops to pay tribute to the true original Mickey Mouse and his beloved Minnie with a surprise celebration that includes this fabulous street party!

The excitement gets underway with a colorful musical procession parading up Main Street, U.S.A. led, for the first time, by energetic, live-singing hosts! As the singing hosts keep things hopping along, you’re invited to boogie to the new, original song “It’s a Good Time” and modern remixes of classic tunes. While Mickey and Minnie will be on hand, be sure to also look out for 5 colorful floats featuring beloved Disney pals such as: