Here is everything you need to know about the amazing Touchstone movie Mumford including casting, reviews, fun facts and more. I hope you find this listing informative and helpful! 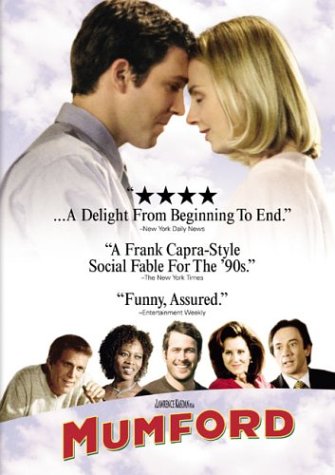 MUMFORD has a first rate ensemble cast including Ted Danson, Martin Short, Mary McDonnell, Jason Lee, and Alfre Woodard. When a would-be psychologist, curiously named Dr. Mumford (Loren Dean), comes to the idyllic town of the same name and offers his talent for listening and a disarming frankness, the town’s quirkiest citizens scramble for a seat on his couch. As he lightens hearts darkened by old secrets — including those of the beautiful and troubled Sofie Crisp (Hope Davis) — no one realizes he’s hiding a whopper of his own, or that he’s fallen head over heels for one of his patients! Filled with personality disorders, surprises, offbeat alliances, and some hilarious fantasies.
Purchase Movie