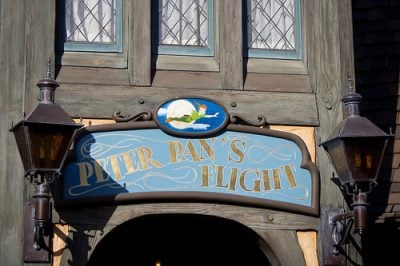 On Disneyland’s Peter Pan’s Flight, Sail high into the moonlit sky with the boy who wouldn’t grow up. Board a colorful galleon and, with the help of some pixie dust, embark on a high-flying adventure, passing many of the unforgettable settings and scenes made famous in Disney’s animated film, Peter Pan.

Return to Never Land
Journey to the Darling children’s nursery, where Wendy, Michael and John are surprised to make the acquaintance of Peter Pan. Sail through the nighttime sky over London, where famous sites like Big Ben and Tower Bridge mingle with a menagerie of glittering lights. Then, descend into Never Land, home to volcanic peaks, tropical flora and sparkling waterfalls.

As music from the classic film builds, glimpse the Lost Boys and Mermaid Lagoon and sail past Skull Rock. Swoop into Pirate’s Cove, home to an enormous pirate ship, and behold Peter Pan in a swashbuckling duel with Captain Hook while a valiant Wendy is forced to walk the plank. Then, share in a victory celebration as you make your way back to London, leaving a defeated Captain Hook far behind.

An Adventure Unlike Anything Else
Peter Pan’s Flight features unique, 3-person pirate galleon vehicles that are suspended on a track from above. This inventive arrangement is one of the many reasons that the attraction has been one of the most popular attractions at Disneyland Park for over half a century.