Here is everything you need to know about the amazing Pirate’s Lair on Tom Sawyer Island attraction at Disneyland including history, reviews, fun facts, photos and more. I hope you find this listing informative and helpful! 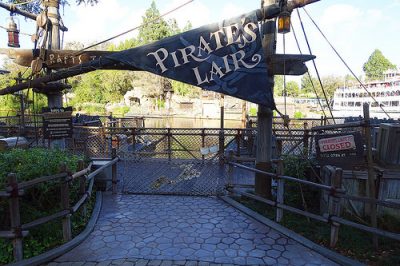 Journey by log raft across the Rivers of America and discover a mysterious place rumored to contain long-lost treasure. Pirate’s Lair on Tom Sawyer Island recalls the plucky adventures of Tom Sawyer and Huck Finn when they ran away to a remote island to live the carefree life of a pirate.

Upon your arrival, wander dusty dirt roads lined with sycamore and oak trees and amble across creaky suspension bridges. Navigate narrow passages amid secret caves and uncover an age-old fort. Along the way, follow in the pioneering footsteps of the frontier’s early settlers, during an era when America was just coming into its own.

You’ll find adventure aplenty around every corner of the island—one of the world’s last pirate strongholds. During your self-guided expedition, be on the lookout for some of these legendary landmarks:

Easy-to-read, posted maps ensure you always know where you are—and where you’re going—during your island adventure.