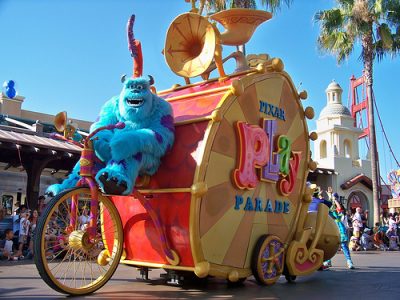 Celebrate Pixar Fest with the debut of a few soon-to-be faves at the Pixar Play Parade all-new location.

Disneyland Park hosts the Pixar Play Parade, a bubbly, high-spirited spectacular that invites Guests of all ages to join the festivities—now with updated parade elements and more Pixar pals than ever before!

Introducing…
The legendary hopping Pixar Lamp and Ball from Pixar’s Luxo Jr. short lead the way, followed by Joy, Sadness and Bing Bong in Riley’s “Rocket” Wagon from Inside Out.

Keep your eyes peeled—the Up float’s lush jungle greenery means Carl, Russell, Dug, Kevin and her brood of baby birds have hit the parade route. And, of course, Carl’s house isn’t far behind!

Returning…
Get ready to dance along as dazzling performers and some pretty popular Pixar stars pass by—including Monstropolis’ own baton-twirling Roz, drumming Sulley and wise-cracking Mike from Monsters, Inc.

Superpowers more your style? The Incredibles are a sight to behold as Mrs. Incredible, Mr. Incredible, Violet and Frozone arrive on an impressive float that’s been overtaken by a towering replica of Syndrome’s Omnidroid. Plus, dancers on spring-loaded stilts pump up the crowd to keep spirits—and energy levels—high!

Ride the wave with Crush and his Finding Nemo friends—Marlin, Nemo, Dory, Squirt and a bevy of baby turtles. The immersive visuals draw Guests of all ages into this aquatic underwater world.

Shake off those sea legs, regain your bearings and cheer as the tiny stars of A Bug’s Life appear— the loveable Heimlich leads the way with Flik, Atta, Dot and Slim following on the longest float in the entire parade.

No grand finale would be complete without Woody, Buzz Lightyear, Jessie, Rex and the Toy Story gang. This phenomenal float has them all—plus a group of flipping, flying, downright gravity-defying acrobats who’ll take your breath away!