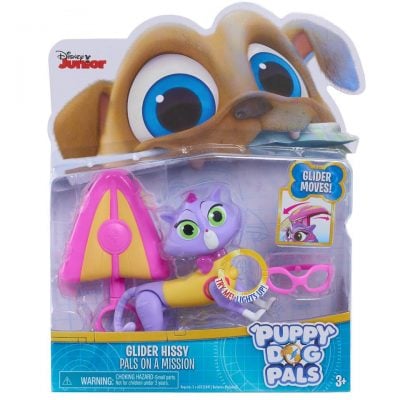 Now kids can play out their own adventures from Disney Junior’s new hit pre-school series, Puppy Dog Pals with the Light-Up Pals On a Mission Glider Hissy Figure!

Hissy stands 3-inch tall and comes strapped to a removable kid-powered pink glider, ready to soar on to the next adventure! Press Hissy’s chest to watch her glittered bow-tie collar light up! Hissy comes with articulated legs and head so kids can move her into fun action poses for even more kitty play! The perfect addition to every Puppy Dog Pals collection! Collect all four Light-Up Pals On a Mission Figures including: Hissy with Glider; Secret Agent A.R.F. with Amplifier; Helicopter Bingo with Propeller and Scuba Rolly with Jet Pack (each sold separately).