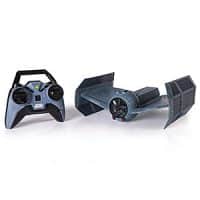 When Darth Vader joins a space dogfight in his TIE Fighter, that’s when you know this has gotten real. The Dark Lord of the Sith doesn’t just jump into his starfighter and lead Black Squadron out around the Death Star for any old standard patrol mission. When Vader is involved, you’re into the big leagues.

Put Darth Vader into the heat of battle with this real flying R/C TIE Advanced x1! It’s the ship that Darth Vader himself flew in the Battle of Yavin, the very one that he survived the destruction of the first Death Star in. Experience the thrill of Star Wars outside with true ducted propellers to recreate your favorite battle scenes. Uses 2.4GHz communication for superior control and a long-distance flying range. Built from crash-resistant materials, you’ll be able to handle whatever the rebel scum can throw at you!