Here is everything you need to know about Walt Disney World’s Epcot’s Spaceship Earth ride including history, fun facts, photos and more. I hope you find this listing informative and helpful! 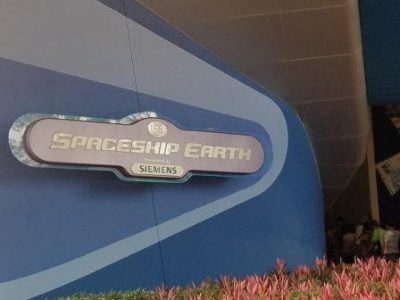 In Epcot’s Spaceship Earth, travel in time and explore the history of communication on a ride that takes you from the Stone Age to the computer age.

Enter the iconic geosphere for a look at the landmark moments that made today’s communications technology possible.

Travel back to the dawn of recorded history, when early man painted his thoughts on cave walls, the Egyptians invented papyrus and the Phoenicians devised the alphabet. See ideas spread like wildfire with the invention of Johannes Gutenberg’s printing press, Greek systems of mathematics and the inspiring works of the masters of the Renaissance. The wheels of time turn ever faster as we progress to the modern age of media communications, from newspapers announcing the end of the Civil War to the televised broadcast of the moon landing and beyond.

Lifelike Audio-Animatronics displays and the soothing tones of narrator Dame Judi Dench give you an inspiring history lesson on this leisurely, 16-minute Omnimover-style ride.

Upon your return to Earth and the present day, you’ll have the chance to design the kind of future you want to live in using the touch screen in front of you. Answer several brief questions then get ready to see what your tomorrow looks like!