Here is everything you need to know about Walt Disney World’s Hollywood Studios’ Star Wars A Galactic Spectacular show including history, fun facts, photos and more. I hope you find this listing informative and helpful! 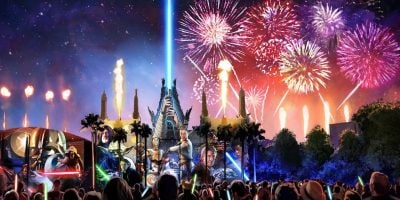 Conclude your day in a galaxy far, far away with Star Wars A Galactic Spectacular: an all-new nighttime spectacular bursting with memorable Star Wars moments.

State-of-the-art projection effects, dynamic lighting, lasers and pyrotechnics light up the night like never before! The music, magic and characters of Star Wars combine with special effects and fireworks to put you inside iconic scenes from the Star Wars saga.

You’ll be thrust into the middle of the action as you gaze upon Tatooine’s famous twin suns, fight through an army of Trade Federation battle droids, navigate a swirling asteroid field, rocket down the Death Star’s narrow trench and deliver a heroic final blow to Starkiller Base.

Gather your favorite Jedi, Jawas, Wookiees, droids and Ewoks for an experience you can only get at Walt Disney World Resort. The sounds of John Williams’ majestic Star Wars themes fill the air as the sights of twinkling lights fill the sky.

While a dazzling array of colors burst above you, imagine the awe-inspiring sights of exploding starships during a legendary Star Wars space battle—what better way to celebrate Star Wars than watching a show written on the stars! (source)