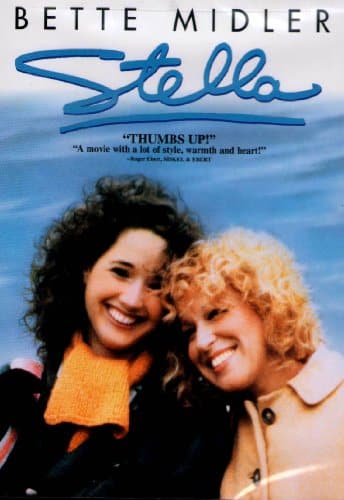 From DOWN AND OUT IN BEVERLY HILLS to BEACHES, superstar Bette Midler has wowed audiences worldwide with her music, humor, and charisma! Midler now delivers a most engaging performance in her latest hit, STELLA! Tough and fiercely independent, Stella discovers that she is pregnant after a brief relationship with Dr. Stephen Dallas, but is too proud to accept a marriage of convenience from him or her well-meaning best friend, John Goodman (O BROTHER, WHERE ARE THOU?). Ready to face life without regrets, Stella single-handedly raises her loving daughter Jenny (Trini Alvarado). Through the years, the two share a very special relationship, until Stella faces the truth — that she cannot provide her daughter with a life of advantages her wealthy father can give her. STELLA is a warm, humorous, and thoroughly entertaining film that speaks to the heart of all audiences! (source)