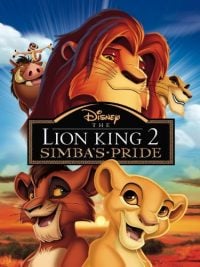 In The Lion King II: Simba’s Pride, experience the power of “Upendi” – which means “love” – as Kiara, Simba’s strong-willed daughter, seeks adventure away from her father’s watchful gaze. Timon and Pumbaa can do only so much to protect her, especially when she encounters an intriguing rival, Kovu, a cub who is being groomed to lead Scar’s pride. As Kiara and Kovu search for their proper places in the great “Circle of Life,” they discover that it may be their destiny to reunite their prides and bring peace to the Pride Lands. Featuring the original all-star voice cast, breathtaking animation, and enchanting songs, Kiara and Kovu’s adventure thrills audiences of all ages as the glorious “Circle of Life” continues for a new generation.