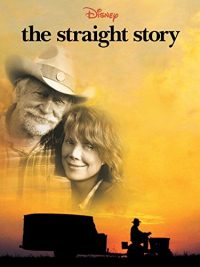 In Disney’s The Straight Story, Alvin Straight is a no-nonsense man who has never been one to lean on others. Now, at an age when his eyesight denies him the ability to drive and walking is accomplished only with the help of two canes, Alvin lives a quiet life with his daughter Rose. But when the call comes that Alvin’s estranged brother Lyle has suffered a debilitating stroke, Alvin embarks on a dangerous and emotional journey to make amends. With little money, but plenty of patience and tenacity, he climbs aboard his 1966 John Deere lawnmower and plots the 260-mile course from his small Iowa town to Lyle’s home in Wisconsin.