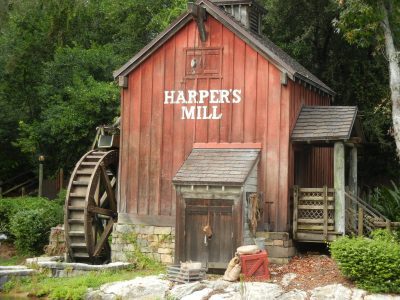 On Tom Sawyer Island, brave an adventure all your own at this rustic, secret hideaway inspired by the stories of Mark Twain.

Journey by log raft across the Rivers of America and discover an idyllic place influenced by the works of Mark Twain. Arrive at Tom’s Landing and embark on a self-guided expedition into the heart of early America.

Wander dusty dirt roads lined with sycamore and oak trees and amble across creaky suspension bridges. Navigate narrow passages amid secret mined caves and uncover an age-old fort. Along the way, follow in the pioneering footsteps of the frontier’s early settlers, during an era when Mark Twain and Tom Sawyer reflected an America coming into its own.

Pick Your Path
You’ll find adventure aplenty around every corner of Tom Sawyer Island. During your tour, be on the lookout for some of these legendary sites:

Along the way, easy-to-read maps ensure you always know where you are during your island adventure. (source)