Here is everything you need to know about Walt Disney World’s Hollywood Studios’ Toy Story Midway Mania ride including history, fun facts, photos and more. I hope you find this listing informative and helpful! 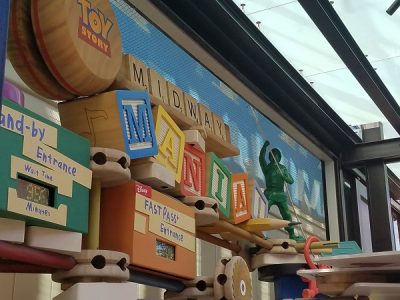 Zip through a virtual gallery of exciting carnival games based on the hit animated film series.

Step inside Andy’s room and wind your way through a toy treasure chest of classic playthings. Pass a Candyland® game box, Viewmaster® discs, crayon drawings and a Scrabble board before picking up a pair of special 3D glasses for the fun to come.

Playtime!
Climb aboard an early 20th-century-inspired Carnival Ride Tram and grab your spring-action shooter. With 3D glasses on, glide into the Toy Story Midway Games Play Set and take aim at stationary and moving 3D objects in a variety of fast-paced games.

Thrilling Games of Skill
Toy Story Mania! invites you to play 5 unique, virtual carnival games in 3D alongside the loveable cast of characters from the Disney•Pixar Toy Story films.

As each game is completed, your Carnival Ride Tram will quickly rotate and slide onto the next game.

Compete with friends for the highest score or try to achieve a new personal best! But remember, whether you’re an expert or a beginner, everyone’s a winner!

Surprises Galore!
Select targets throughout the attraction feature special 4D special effects, like air blasts or water sprays. Don’t be surprised if that 3D balloon you’re aiming for splashes you when you hit it.

Scoring Points
Points pile up when you hit your mark. As any good cowboy or cowgirl knows, harder-to-hit targets are worth more. After each game, your score is posted showing how well you did; after all games are played, your total score is tallied and displayed.