Here is everything you need to know about Walt Disney World’s Hollywood Studios’ Walt Disney Presents attraction including history, fun facts, photos and more. I hope you find this listing informative and helpful! 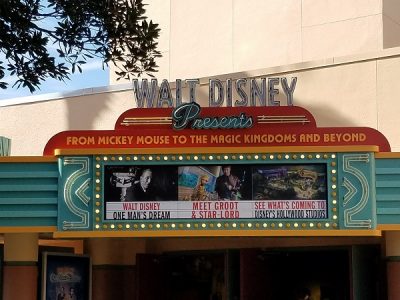 Specially created to commemorate the 100th anniversary of Walt’s birth, Walt Disney: One Man’s Dream invites you to discover the man behind the mouse, his many achievements and his ongoing legacy.

A Treasure Trove from the Disney Vault
Discover a vivid and intimate portrait of Walt through the presentation of over 400 artifacts featuring one-of-a-kind animation art, paintings, storyboards, photos, models, props, costumes and set pieces, including:

A Film Tribute in Walt’s Own Words

After your gallery tour, watch a heartfelt 15-minute film hosted by Julie Andrews.

Relive the life and times, the trials and tribulations of a creative visionary, utilizing rare audio recordings. Listen to Walt recount his story over historic film footage and home movies never before made available to the public. Discover how a hard-working dreamer touched the lives of so many around the globe.

Continuous Daily Screenings
The film plays repeatedly throughout the day in the theater at the back of the exhibition gallery. Seating is on a first-come, first-served basis.