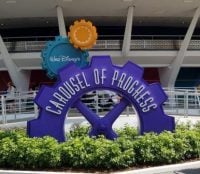 In Walt Disney’s Carousel of Progress, discover how industrial advances over the past century have changed everyday living for an American family.

Look back to the past and get a glimpse of the future at Walt Disney’s Carousel of Progress, a fascinating 21-minute Audio-Animatronics stage show celebrating the evolution of technology throughout the 20th century and today.

This light-hearted show follows a typical American family—narrated by patriarch, John—through 4 generations of the past 100 years. During each era, learn how the technological marvels of the day have made life more convenient, comfortable and fun—and paved the way for even more new and exciting innovations.

A Revolutionary Theatrical Experience
Presented inside a revolving theater, the show includes an innovative audience seating area that rotates around a stationary central stage from act to act like a carousel. (source)