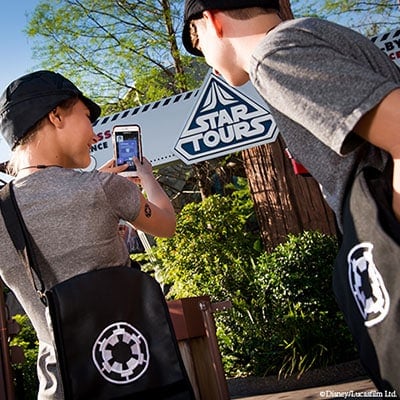 Update 8/2/16: Finally, the new Star Wars Rebel interactive game at Walt Disney World has launched! The Disney World Star Wars Rebels Interactive Adventure is an augmented reality app-based game that is organized in missions that take place around the parks and resort. The game has to be purchased as a package along with associated “gear” (lightsaber, posters, etc) from Disney Floral and Gifts.

The game officially becomes available on August 15th, and certainly isn’t cheap. The package runs $499.99. If you can swing that price, it definitely looks like a fun game for Star Wars Rebels fans.

Original post: 4/14/16: Disney kind of announced today that they will be launching a new resort-wide “Star Wars Rebels” role-playing challenge this Summer at both Disney World and Disneyland Resorts.

The new game will have an augmented reality element to it (IE: when you use a device to view what is actually in front of you with a digital overlay like a Tie Fighter flying at you) and will feature Ezra Bridger from “Star Wars Rebels.” The cool twist to this game is that it will start in your resort hotel room and end at the Star Tours attraction, so it isn’t confined to any one park.

It will be interesting to see what they have in store. I will definitely post any updates as more details are released. They did mention in the announcement May the 4th (an unofficial Star Wars holiday). Maybe that will be launch day? Guess we’ll have to wait a bit to see.

Be the first to comment on "Disney World’s New Star Wars Rebels Role-Playing Challenge. What You Need to Know."