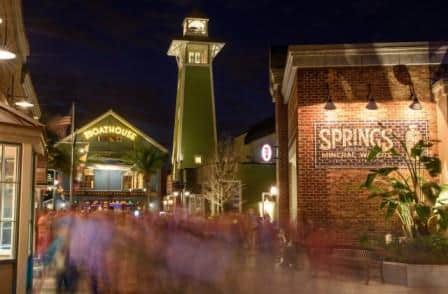 Walt Disney World Resort’s Disney Springs sure has come a long way since its days as Downtown Disney. The shopping and entertainment hub of Disney World has undergone a complete overhaul with a number of new retailers and restaurants being added to its offerings, a new theme and a wonderful new Town Center to anchor the sprawling development.

As if the Disney Springs changes of 2015-16 weren’t enough, visitors can look forward to even more additions and changes in 2017. Disney recently recapped what we can expect for Disney Springs 2017. Here are the highlights:

Paddlefish – Sleek and modern after a bow-to-stern transformation from the former Fulton’s Crab House, Paddlefish will serve fresh seafood, steaks and chops. Unique menu choices for seafood lovers include a build-your-own boil. A new rooftop lounge will serve up a late-night menu and shipshape views of the water and Disney Springs. Open for lunch, dinner and Sunday brunch.

Planet Hollywood Observatory – Longtime Downtown Disney-goers will remember the iconic domed restaurant that drew celebrities and fans of the Hollywood scene. The reborn space will be themed to stars of a different kind: a turn-of-the-20th-Century observatory serving up amazing burgers and sandwiches created by celebrity chef Guy Fieri, and craft cocktails whose names are inspired by the planets and space travel. Movie memorabilia, video screens, contemporary music and themed merchandise complete the scene.

The Polite Pig – A sister restaurant to the Ravenous Pig, a favorite with Orlando locals, The Polite Pig will bring the same focus on genuine Florida cuisine to a broader global audience at Disney Springs. Lunch and dinner menus will feature a variety of wood-fired smoked and grilled items as well as an innovative beverage program that serves all drinks on tap, including beer, wine and cocktails.

Wine Bar George – Orlando master sommelier George Miliotes uncorks his first Disney wine bar in a space reminiscent of a winemaker’s estate warmed by oak wood and cozy lighting. Small plates dominate the food menu but it will be the wines with a starring role: more than 100 selections both by the bottle and the glass in a range of varietals and vintages.

Be the first to comment on "Disney Springs 2017: What to Expect"