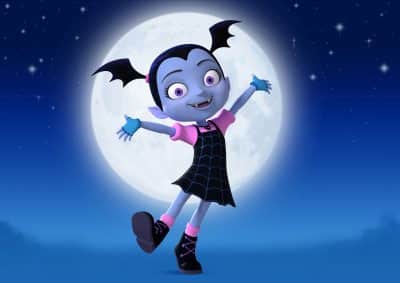 Here is a quick plot summary from the Disney/ABC release:

Set in an urban Pennsylvania neighborhood, “Vampirina” is centered around Vee as she settles into her new surroundings, including making friends and attending a new school. Excited to experience everything that the human world has to offer, Vee will learn that while it may be easier to blend in with her peers, it’s important to celebrate the differences that make everyone unique. Always by her side, Vee’s mom and dad are also adapting to their new life as proprietors of the local Scare B&B, a bed and breakfast for visiting ghouls and goblins.

Here is a little taste of what to expect from Vampirina in a new trailer from Disney Junior:

Vampirina will debut on Sunday, October 1st at 11am with two back-to-back episodes on the Disney Channel Disney Junior and the Disney NOW app.