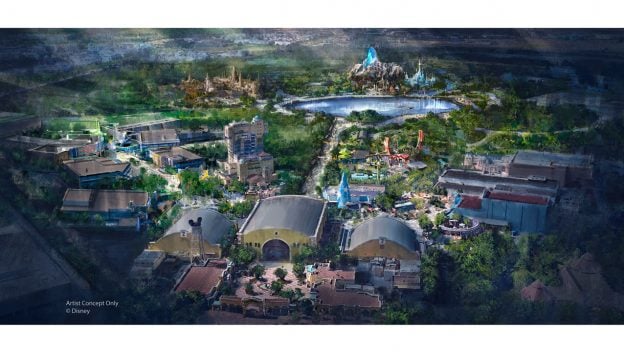 Here is a rundown of what we know so far about this ambitious new project from the Disney Parks Blog post this morning:

The new development will include a transformation of Walt Disney Studios Park, adding three new areas based on Marvel, Frozen and Star Wars, along with new attractions and live entertainment experiences. A new lake will be the focal point for entertainment experiences and connect each of the three new areas, completing one of the most ambitious projects at Disneyland Paris since its opening in 1992.

“We’re very excited about the future of Disneyland Paris and continue to invest in its long-term success,” said Iger. “The resort is already the leading tourist destination in Europe, and the transformative expansion we announced today will add even more of our beloved characters and unparalleled storytelling to create new lands, attractions and entertainment that further elevate the guest experience and drive new opportunities for tourism in this dynamic region.”

The multi-year development will roll out in phases beginning in 2021, significantly expanding Walt Disney Studios Park. Each new area will bring to life some of Disney’s most popular stories and characters, including the previously announced reimagining of Rock ‘n’ Roller Coaster Starring Aerosmith as a high-speed, hyper-kinetic adventure with Iron Man.

This new development will build on the success of the resort’s 25th Anniversary celebration and enhance the guest experience for millions of visitors in the years to come. We can’t wait to share more details with you soon!

As always, I will be adding updates here as more details about the Disneyland Paris expansion project are release, so be sure to subscribe and stay tuned!